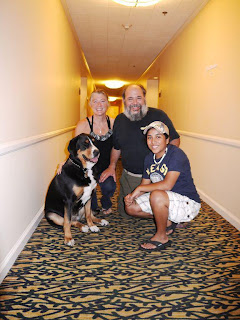 I would like to take a second to Thank Everyone for supporting my family through this wonderful journey with the Hero Dog Awards & Teddy Bear Project. Not only that, but giving us, as a family, the opportunity to share it with everyone. We are very appreciative of everyone who has taken the time to help us with our project throughout the 11 months since we started the Teddy Bear Project. We have since collected over 2,000 stuffed animals for the kids in the nursing home and elderly in the nursing home. All thanks to you!

If you missed the awards show the other day, here is our segment that was played on the Hallmark Channel. Click the link below.

About 4 years ago Jerry Means started the National Fire Dog Monument to build the Arson Dogs a bronze Monument. The monument is a full-size bronze firefighter standing upright, looking down at a sitting Labrador Retriever who is looking up at his/her handler.

They are nationally approved 501 (c) (3) monument operating under the Federal Number of  26-2962698. The NFDM has an approved  in writing permanent home for the monument at fire station 3 in Washington DC when it is complete. The Monument will be in a permanent loan to the Washington DC Fire Museum. The Fire Station 3 is located downtown DC area and protects the Capital Building of the US.

Jerry has been trying to raise the $40k that is required to sculpt the piece. He has held silent auctions, sold prints, and challenge coins, attended pancake breakfasts, and ice cream fund to collect approximately $23k the $40k that is needed. Approximately 4 weeks ago their 22 year old fire fighter/artist started on the piece. That is wonderful that the sculpture is being started, however, it put a ton of pressure on Jerry to ensure the balance of $16k is raised to finish the Financial burdon of the project.

Jerry is now thinking about setting up a kissing booth for Sadie after seeing the recent Betty White Incident.

The Majority of the K-9's in the Fire dog program are rescued from the New York City pound, and a blind dog school in Florida.

Both Sadie and Jerry have been active in numerous fundraisers for animals in need, and general emergency services. Sadie has won numerous awards including the Max Fund (A No Kill Shelter) "Golden Paws Award" for saving acts towards animals. They have also been recognized by the American Humane Association for their work on a case where an idiot broke into an animal shelter in Englewood, Colorado, stole some puppies and set them on fire in public places where they were trapped inside a plastic case.


Below is all the contact information for
the NFDM in Washington DC.

Do it for Ken

As many people know by now we lost someone really special to us recently, Ken. Ken was 83 years old and full of life. He loved to tell jokes and share stories with us. He passed away on September 22, 2011 while we were away on our trip to L.A for the Hero Dog Awards, so we just found out about his passing when we got home.

Ken was included in Stacey's video for the Hero Dog Awards. He was looking forward to watching himself on TV.  Unfortunately he will never have the opportunity to do so.  So I am asking YOU to turn on the Hallmark Channel  and tune in on American Humane Association Hero Dog Awards on Friday November 11, 2011 8/7c. Watch Ken while he get's his 30 seconds of fame on the big screen. I know it would have meant a lot to him.
Posted by Maria Mandel at 8:18 AM 5 comments:

His name is Ken

Ken is his name. We visit him regularly at the nursing home. I first met him over my spring break in April. He is such a kind and funny guy, but there is something really special about him. Ken is a diabetic and he has a couple other medical problems. Before he went into the nursing home he lived at home with his wife. His wife spent a lot of time taking care of him to where it would wear her down. Ken saw this and wanted to do something about it. So he said he would move in to the nursing home. It wasn't an easy decision to make. 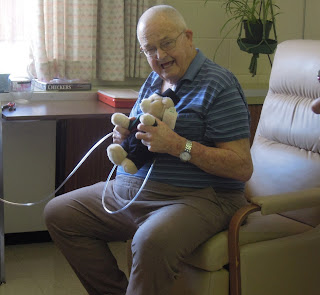 Ken has been at the nursing home now for several months and seams to be adjusting well. He does miss somethings at home which is understandable. We started visiting Ken and brought him some cookies. He really enjoys our visits especially with Stacey.

Ken is a big dog lover. He use to have a little Chihuahua named Tequila. She use to ride with him and his wife on the boat that they had. I love Ken so much. He means a lot to me. I am so lucky to have Ken in my life.

Why the Teddy Bear Project?

Many people don't know the story behind the Teddy Bear Project. So I want to take a second to share it with everyone.

Growing up I use to visit the nursing home with my dad and our beloved dog Gracie. I was little so I don't remember to much. All I know is I really enjoyed visiting the folks especially Marget. She was one of the people who I became somewhat close too. After visit for a couple years the nursing home closed down.

So we stopped going for a while. Back in 2009 we started going again. Gracie had passed away and we had our puppy Stacey Mae. Stacey was just a little over 11 months old when she first visited. Stacey is a very mellow dog and really good with people.

The first people I had visited was Gene and Ruby. They were married for over 60 years. Gene was almost 100 years old. He talked softly but can remember a lot of things from his life. He would share stories about living in Colorado and pets he had in the past. He really enjoyed getting visits from Stacey Mae. She really helped brighten their day some.

The first time I visited Gene he grabbed my hand and cuffed his other hand around it and looked into my eyes and said "Thank You". I never thought those two words would change my life.

When Gene passed away my heart was broken and I must say it still is. Everyone I visit I form some kind of bond with them. One thing I miss the most about Gene was the way his face lit up when ever he smiled.

One night I was thinking about what I wanted to do for the folks in the nursing home for the holidays. Many of the folks there are forgotten about and have no one to visit them. I wanted to do something that let them know there are still people out there who care about them. Even if they are strangers.

As I was thinking about this I thought of Gene and how he would hold my hand and look into my eyes and say "Thank You". He knew there were other people out there who cared about him. So I started the first Teddy Bear Project in Honor of Gene. We did our first collection for the folks in the nursing home and expanded it to the Children in the Hospital.

As of today I have collected over 2,000 teddy bears and stuffed animals for the kids in the Hospital and folks in the nursing home. It's all thanks to everyone for helping me and Gene for inspiring me. God Bless you Gene. I miss you very much.

Hey everyone my friends over at West Cost Dogs did a small interview with us check it out by Clicking Here
Posted by Maria Mandel at 3:56 PM No comments:

There is a hospital in Colorado Springs called the Memorial Hospital For Children. They see thousands of kids a year. Now a lot of these kids are scared when the first walk through the hospital doors. They are in an unfamiliar place. Back in May the Memorial Hospital for Children had sent out a Blanket SOS . They ran out of comfort blankets for the kids.   Blankets help brighten the patients rooms. But most importantly, the provide comfort in a big, strange and - despite the doctors best efforts - sometimes a painful place.


Preferred Materials
Materials That Can’t Be Used
Preferred Sizes
Suggestions for Girls
Suggested Prints for Boys
Suggested Prints for Tweens and Teens
I will also Still be collecting Teddy Bears/Stuffed Animal. They NEED to be gently used or Brand New. They can be any size.
Kids and the Elderly love really soft animals as they can rub it against their faces. Pillow Pets are big hit. If you send A Pillow Pet those MUST   be new.
They May be sent to:
Stacey Mae Mandel
171 Stream Drive
Guffey Colorado
80820

If you have any questions or concerns you can email me at: eaglehill2009@gmail.com
All of them will find a new home and someone to love them. Some of them will even be saved to be sent in a care package to kids around the U.S who are fighting cancer or other illnesses.
I really want to thank EVERYONE who has helped me out in the last year. It has been amazing to see how everything has fallen into place. I never imagined that I would collect 2,000+ In less then a year.
Thanks, Maria & Stacey Mae
http://www.facebook.com/StaceyMaeTBP
Posted by Maria Mandel at 4:33 PM 1 comment: 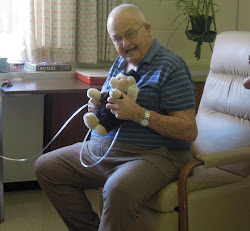 In Loving Memory of Ken Jenkins